Life with dynamics. Winds and woods. Snow and spring. Here is just a little report from some mid-swedish semi-boreal forests, January to April 2019. Images that maybe give some apetizer upon forest dynamics and biology – a world quite full of life and sometimes action! 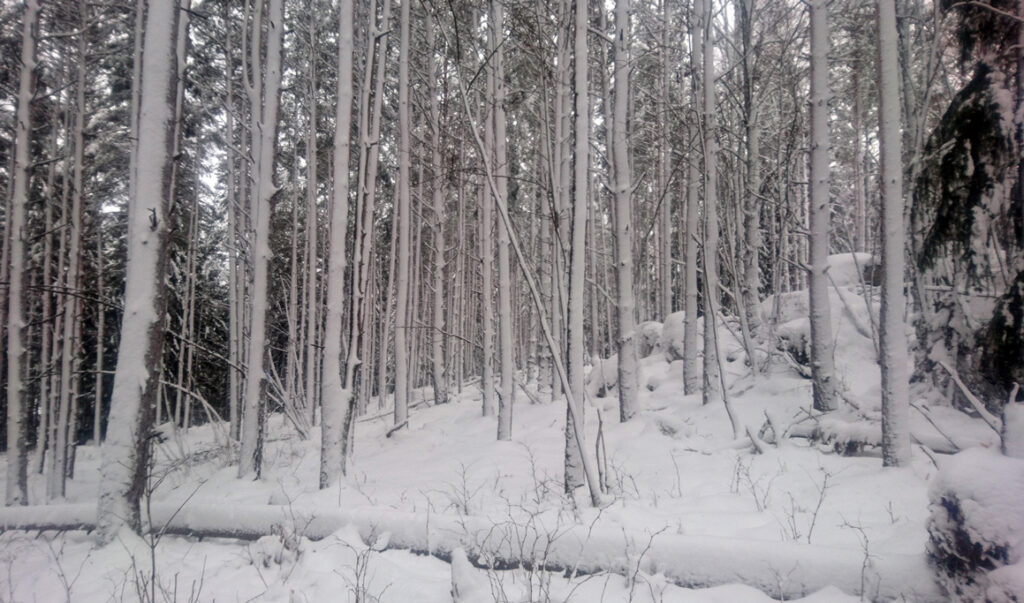 Before thinning (the tract towards south). In the end of January approx. 30 cm of snow on the ground, but soon to melt completely away in the middle of the winter, leaving a bare unfrozen ground for the rest of the winter. Soil frost thawing is not that very great before spring. And, as we have noticed in field, the zero-passages has increased significantly recent winters. (This is unfortunaltely also in line with climate change winter models for mid and north Sweden, SMHI).

After thinning (A wide mosaic photo) and thawing. Same forest as in the image above but from a different photo position (the tract towards west) about a week later.

In beginning of 2019 the storm ”Alfrida” hit the mid-east part of Sweden. It came in with a northern wind-direction and many trees and forests were exposed to a less common wind direction. Thus, after a summer with severe drought many trees fell. A disaster. A month later heavy snow fall broke the tops of younger trees. So, within a approx. seven months typical large scale forest dynamics have taken a significant toll out of the semi-boreal midth swedish forests; i.e. drought, wild fires, storm and heavy snow (in occurrence of melting and freezing, creating a heavy burden, and bending tree tops until broke). So land managers, foresters and entrepreneurs have been busy to sort things out. Good or bad? Anyway that is the way it goes in this country where most forests are controlled under the production googles. 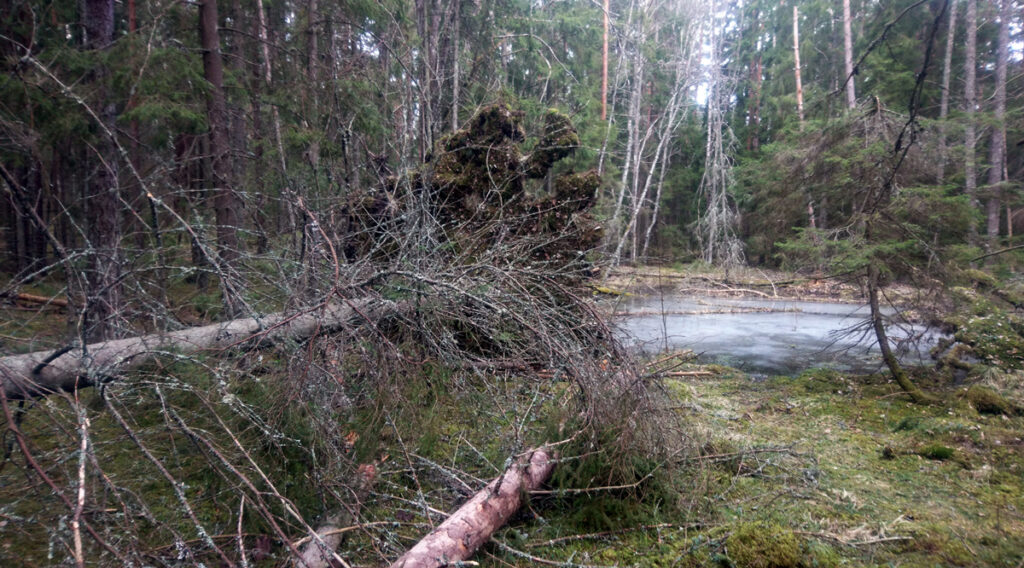 Storm fallen trees next to a little pond, here with ice. 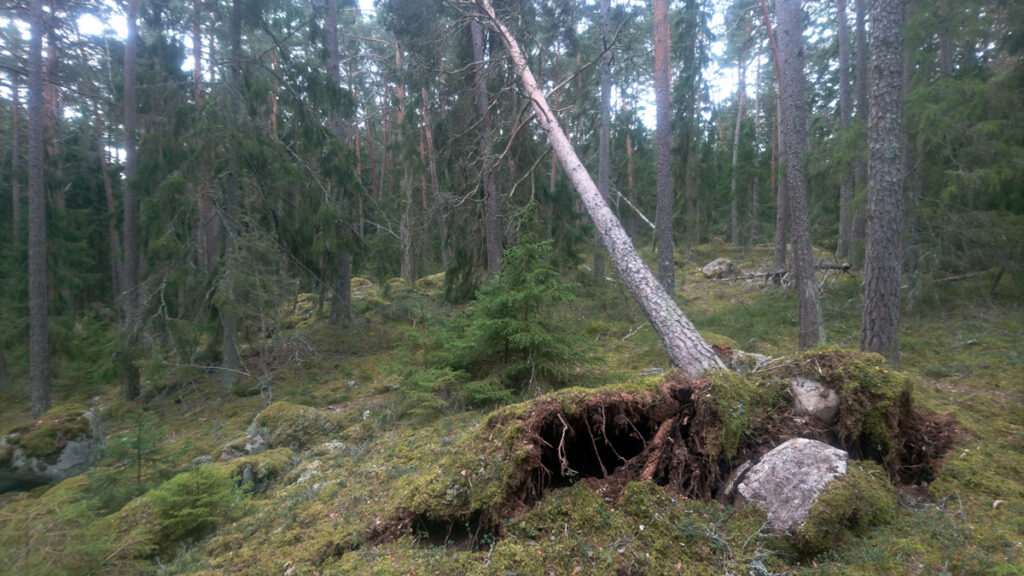 The storm has created new oportunities for some mammals to find dens. 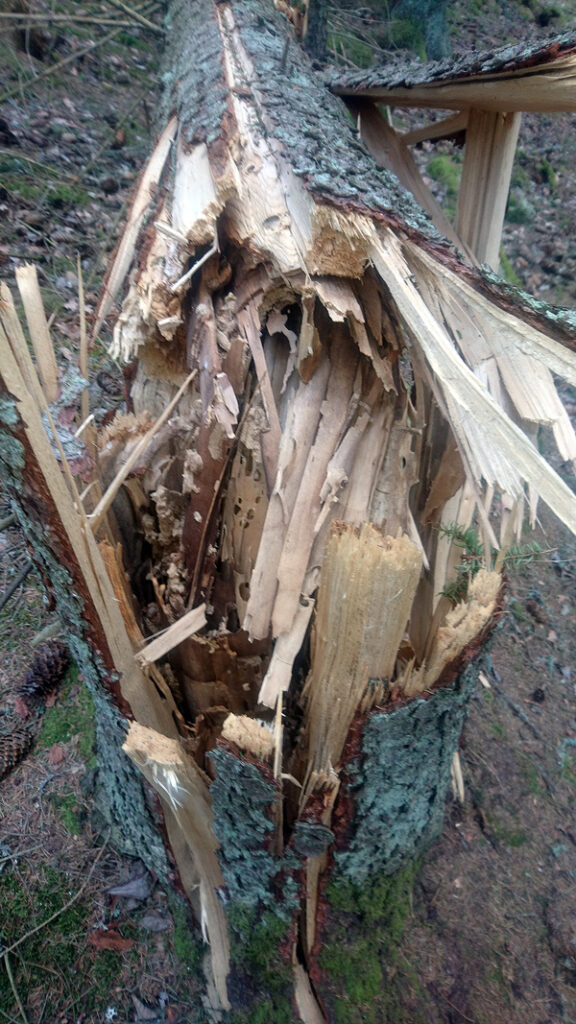 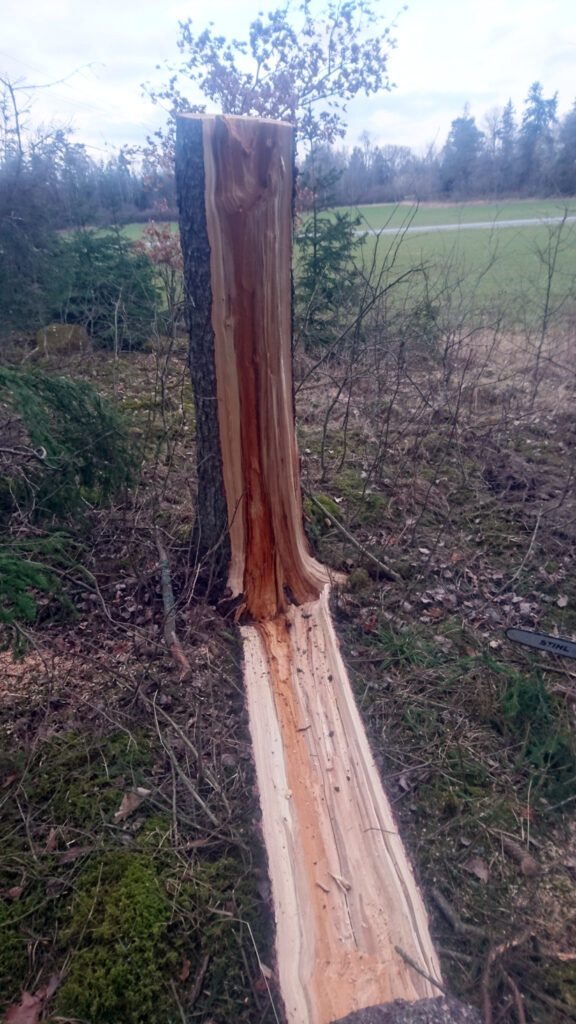 (Left) A common Norway spruce [Picea Abies] affected by root rot [Heterobasidion], carpenter ants [Camponotus] and finally hard wind (The storm Alfrida). Such a trunk is left to enrich biodiversity but debarked to minimize outbrake of high numbers of Bark beetles in surrounding healthy spruce trees. (Right) A logged stormfallen tree. Another example of root rot that has been going on for a while (dark brown colour). 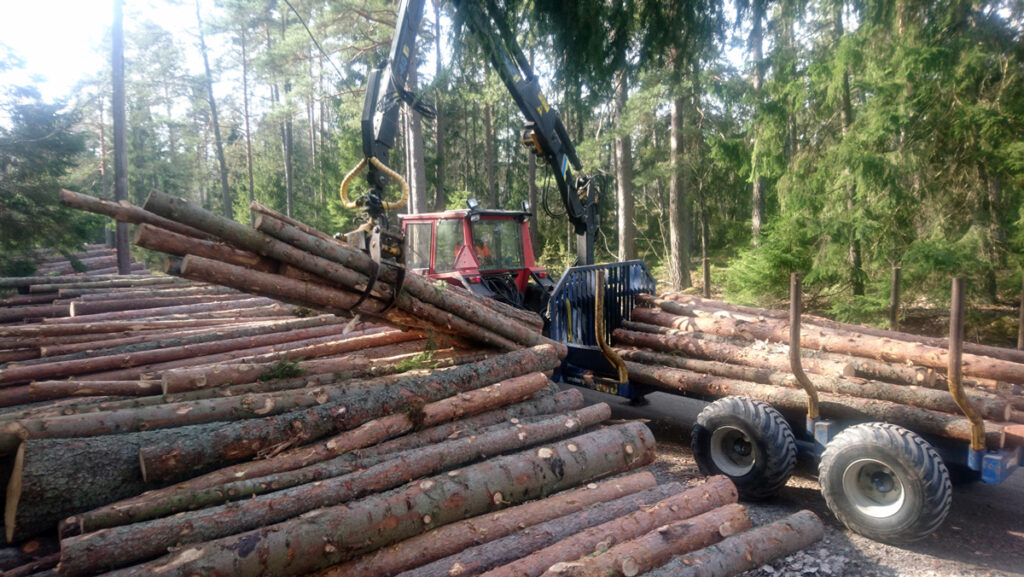 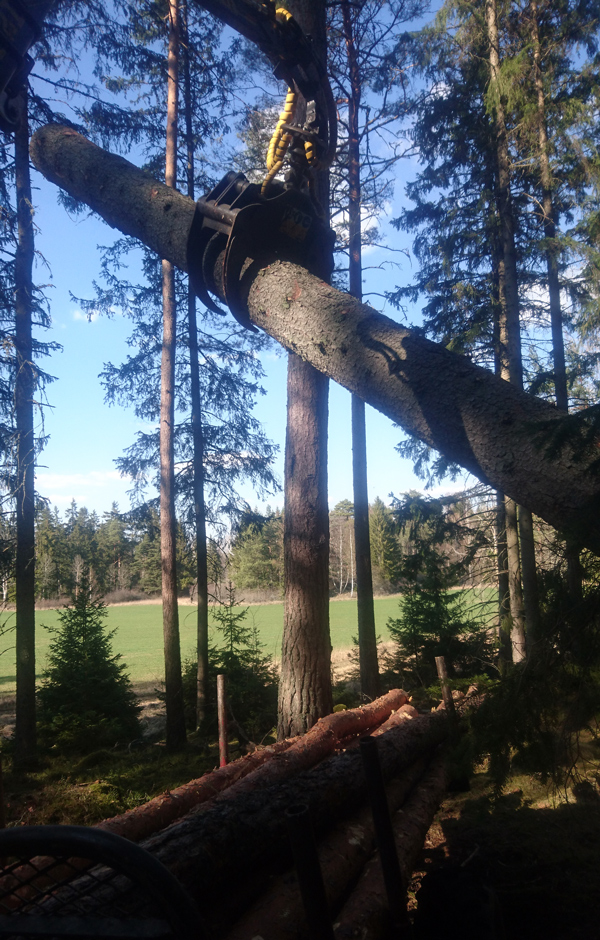 The pretty small field surrounded by forests. A farmers cultural landscape and the forests are shaped by small scale treatments (e.g. liberation thinning), a so called farmers forest evolves, in comparison with large scale industrial and production tracts, i.e., clear cuts. This kind of mixed relatively small scale ”farm forest” is typically more resilient towards e.g. heavy wind, provided that for instance the edge of the forest next to the field is maintained natural, allowing a slowly evolving succession. 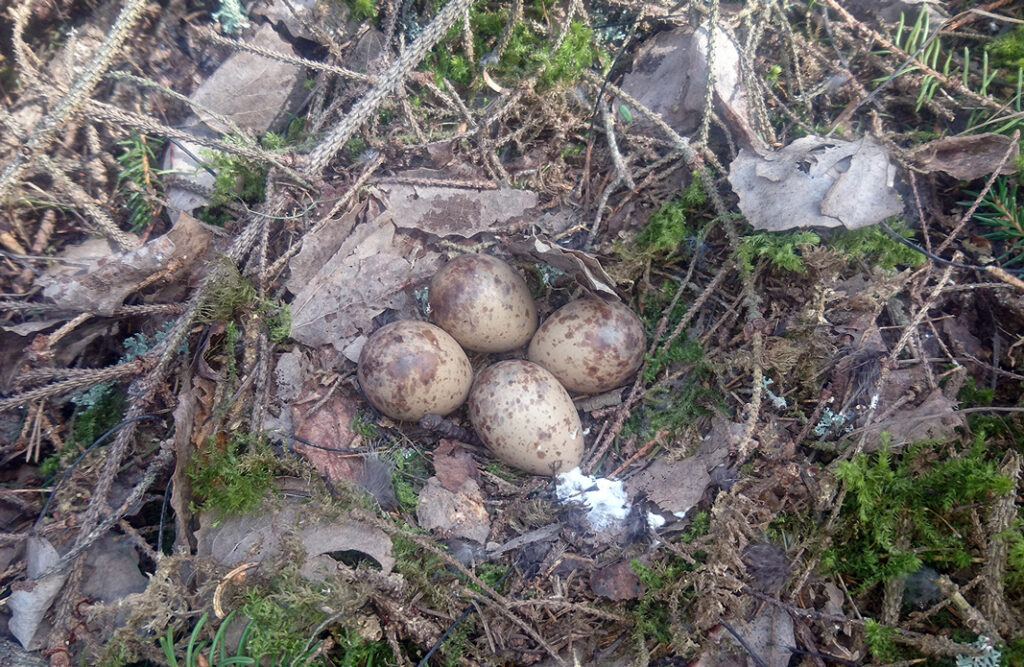 A nest of the Woodcock [Scolopax rusticola]. The swedish name is (this time) more poetic: ”Morkulla”. Anyway, with such a finding, revealed by the off-taking nesting bird, time to step respectfully back. To leave a new soon-to-come hopefully happy life in the forest. And in the best of worlds as it is formed with man and nature in a hopefully good combination. 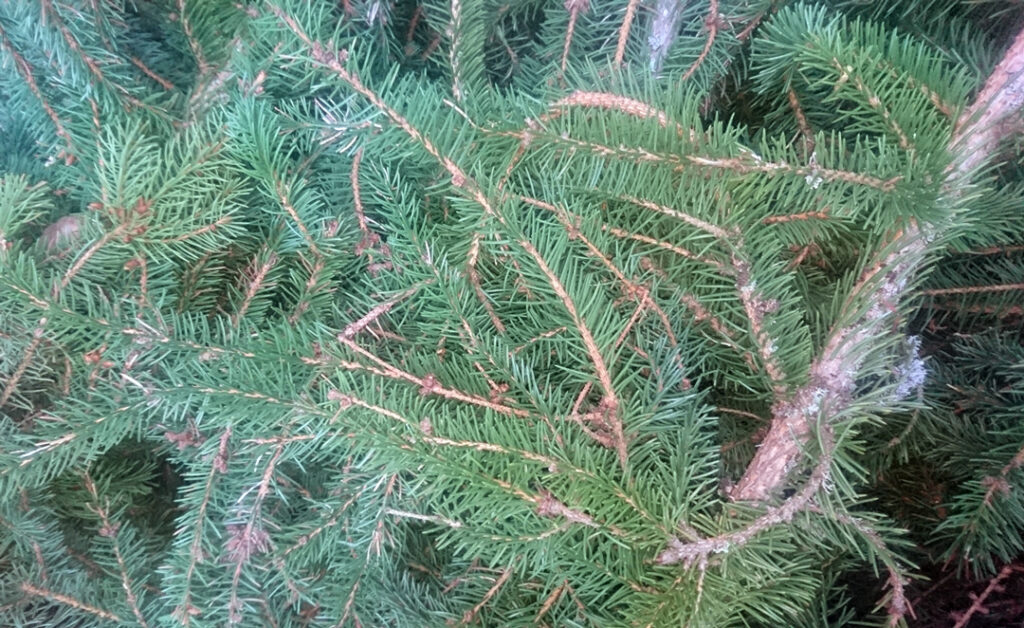 Spruce branch pile, beautiful in its all green colour. Life is colourful in the forest. And maybe you sense the smell of the forest fur.