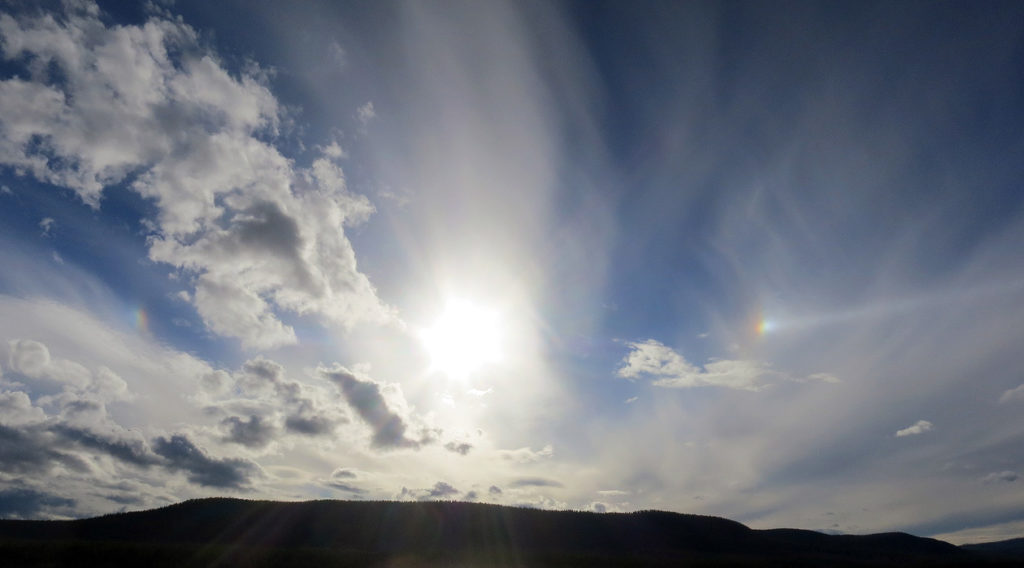 Härjulf shines with his sun dogs waiting for a sounder government in his country. Six months of more autocratic behaviour, pain and lies after the general election… ”That is nothing. Stupid regimes in Sweden? Bah, I have been living in the wilderness for ages”, says the old north giant from his mountain of freedom, still holding his dogs tight. ”They believe they have the power down there”… The fairy tale of Sweden continuous to be written…   [photo: Halo phenomenon and sun dogs, county of Härjedalen, Sweden, 2018, H. Bärring]

Anyway. It is interesting to read about different ages and eras of nature conservation. Nowadays we are talking about an integrated landscape approach with multifunctional landscapes, i.e. culture, production, preservation and conservation goes hand in hand. (In order to reach sustainability, save the biodiversity et c). And in the next breath adding something like, ”we shall not proceed like in the earlier days (say 100 years ago), where it only was about preservation”.

Our thought is like this: Back then, already, man saw how severe the changes were to the land. Because there was plenty amount of old landscapes, apart from modern production, still left. Man started to see back then, how great the impact was of our industrialization. The reaction was natural, ”trying to save some nature”. It was really leading the debate around man and nature. In the western world. Obviously in Sweden.

Now this point of view is criticized as too single minded et c in Sweden. Why?

Well it is probably like it is so much harder to reach success, since the production landscape is overwhelming. And the interests in the landscapes are so much more intrinsic and down right heavy today. So we adapt our arguments. We have new facts and we are more illuminated now… Great then.

God save the early preservationists, the Sagas, the Fairy tales. May they live long among us, follow us 2019 and their spirit shine bright upon our modern dark single minded ways. We have to work harder to discover them and not fall into our own traps.

We all want good. But we are just humans. Just humans. The county Härjedalen, for instance, is one of the most production oriented landscapes today in Sweden, despite its relatively small population. Or thus its relatively small population. The industry is efficient. And this video from the forestry in north of Sweden last 50 years reveals ”the ongoing show” in our still Western Taiga dominated land.

P.S. Per date 11 of januar: The democracy  in Sweden is now defintely out of function. The rest is details, everyting else is details. +60% of the voters expressed a non left wing, socialistic government in our general election. After four months of strange negotiations somehow Sweden still has this regime. Like most of the 1900’s and 2000’s. Today is a day of sorrow. A day to ask who is deciding? Who is running the show? The autocratic one-party power machine keeps on. Scary, very very frightening. Anything to keep the unsustainable wheels rolling towards a quite possible crash.